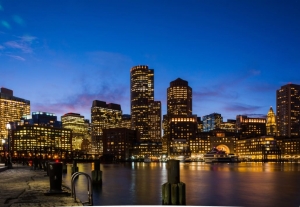 My partner, Cory Parnell, and I traveled to Boston recently to attend the National Cannabis Industry Association’s Seed to Sale Show.  Following the show, I toured Western Massachusetts and visited an adult-use dispensary in Leicester with clients who accompanied me from Denver.  At the time of our visit, there were only five adult-use dispensaries open in the Bay State.

We arrived at the Cultivate store just as it opened at 10 a.m. and the lines were already beginning to form. We were lucky to be there when the lines were short since we heard that on weekends the lines are three hours long!

Our first surprise was that there was no parking at Cultivate except for handicapped spaces.  Instead, we were directed to a large nursery a half mile away and a shuttle van waited there to take us back.  On a cold early Monday morning in February, there were over 100 cars in the nursery parking lot and there was a line for the shuttle van.

After the ride back, we were deposited outside the Cultivate dispensary. There was a tent with heaters and a rope line and this  is where the three-hour lines form.  We heard on that weekends, the traffic coming into Leicester is so heavy that police are called in to direct it.

After about a 30 minute wait, we were allowed inside.  From the rope line, groups were let into the dispensary in groups of about ten.  Once inside Cultivate, we waited in another rope line for an available budtender. The dispensary was well laid out with about a dozen stations for viewing and purchasing cannabis.  An approximately 5,000 square foot cultivation facility was directly behind the retail space in the same building.  The budtender who helped us said they can’t grow enough to meet the demand and have to purchase pounds at wholesale.

Our retail shopping experience had several more surprises.  Only four cannabis strains were available and there were no concentrated waxes or edibles. They did have some hash oil cartridges, and they also carried disposable vape pens with hash oil.  Dispensaries in Colorado often carry over 100 different products.

The biggest surprise of all was that MA prices were over four times Colorado prices. Our Denver clients who were with me regularly sell an ounce of cannabis for $75 at their Denver location.  Cultivate’s ounces were going for $420 the day we were there.

We were back in the shuttle and dropped off at our car in about an hour total time.  Several of our fellow van riders commented on our quick turn-around and the record time for the round trip.

Take-Aways from our Trip to Leicester, MA

It is clear that the demand for cannabis products is strong in the heavily populated Northeast.  More retail and cultivation businesses are needed to meet this demand.  It appears there are many qualified applicants waiting for licenses, but they are not getting issued quickly enough due to regulatory bottlenecks.

One bottleneck is that the local governments must approve the applicants in what is called a “Host Community Agreement.”  This process can take months to approve and then it goes to the Massachusetts government which can be another several months.  Then the building departments approving plans for cultivation facilities and inspecting constructions need to be addressed.  The whole process from start-to-finish can take over a year.

How did these lucky five dispensaries open first?  I think the answer is the towns they are in wanted them there for economic reasons, jobs, and taxes.  The Host Community Agreements were fast-tracked as were the building department approvals.  So it can be done.

Until the other cities and towns in Massachusetts adopt similar processes and the State issues licenses faster, cannabis users there can expect long lines, high prices, and short supply.

Article by: Jim Marty, CPA, CEO of Bridge West LLC. If you have any questions or would like to schedule an interview with Bridge West, please contact Jim Marty,  at 303-651-0304 or jmarty@bridgewestcpas.com.