I recently attended a meeting of Colorado Leads, a political group comprised of leaders of the Cannabis Industry.  Our special guest was Governor Jared Polis. I asked him a couple of questions:

How much tax money has the State collected from cannabis sales and how was that money spent?  His answers were interesting.  Since adult use began in 2014, Colorado has collected over one billion in tax dollars.  He said the money was spend on school repairs, a new State park near Trinidad, and other programs.

While a billion dollars is not a lot of money compared to the total State annual budget of $30.5 billion, it is new money that has not been allocated and spent.

Here are some details:

Colorado cannabis sales have been $2 billion a year, $6.5 billion total since adult use became legal. So, if the State has collected $1 billion in tax dollars then the local communities and counties have collected about the same amount.  That means for every dollar of cannabis sales 30 cents of taxes are raised.  How does this break down?

Here is the history of Colorado tax collections since adult use became legal:

Below is a chart of how these tax dollars are spent: 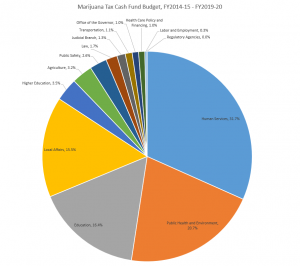 Some of this money is being spent on a yet to be named State Park near Trinidad, Colorado that will open in 2021.  It is the first new State Park to be added to the Colorado Park system since 2013 and will encompass over 19,000 acres.

As we start the New Year, legal cannabis continues to benefit the citizens of Colorado.  Stay tuned.